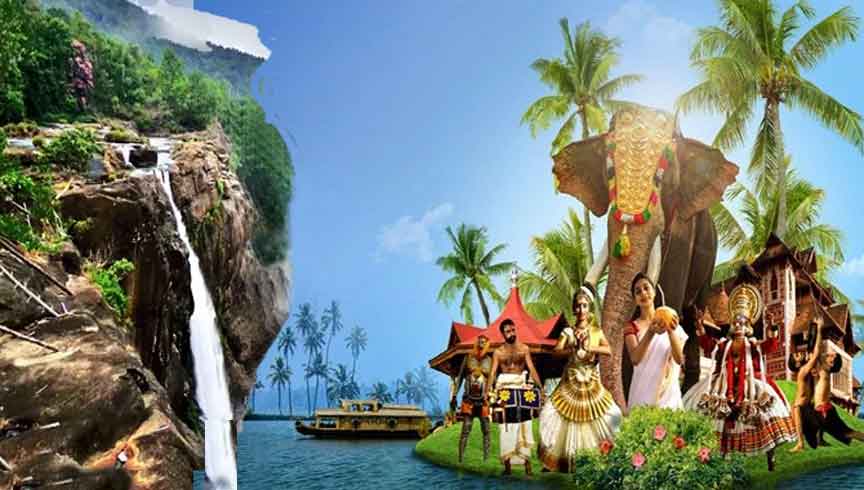 With the Arabian Sea in the west, the Western Ghats towering 500-2700 m in the east and networked by 44 rivers, Kerala enjoys unique geographical features that have made it one of the most sought after tourist destinations in Asia. An equable climate, a long shoreline with serene beaches. tranquil stretches of emerald backwaters, lush hill stations and exotic wildlife, waterfalls, sprawling plantations and paddy fields, ayurvedic health holidays, enchanting art forms, magical festivals, historic and cultural monuments, an exotic cuisine... All of which offer you a unique experience. And what's more, each of these charming destinations is only a two-hour drive from the other - a singular advantage no other destination offers.


Kochi (Cochin) - the “Queen of the Arabian Sea”

Kochi, the commercial capital of Kerala, also called as the “Queen of the Arabian Sea” has a rich bounty of culture, history and natural beauty. The Chinese fishing nets, St Francis church, the oldest European Church in India. Vasco da Gama,the first Portuguese sailor to reach the shores of Kerala died in 1524 and was originally buried here, The Santa Cruz Basilica, originally built in 1557 by the Portuguese, Princess Street where one can witness the grandness of the colonial area. Dutch Palace, Built by the Portuguese in 1557, is built like the typical Kerala style mansion - the Nalukettu. The palace building which stands by the panoramic Kochi backwaters has an exquisite collection of murals and the themes of these murals have been borrowed from the great Indian epics - the Ramayana and the Mahabharatha. Jew town, the centre of spice trade in Cochin, Take a walk along the Jew Town and you can breathe the aroma of pepper, ginger, turmeric and cloves. This street is also famous for the curio and antiquee shops, which are capable of enchanting visitors with their variety and rarity. At the corner of the Jew town, you will visit the Jewish Synagogue, built in 1568 and the oldest synagogue in the commonwealth. It houses many rare antiques.

Forts like the Bekal Fort in Kanhangad and St. Angelo's Fort in Kannur.

Broadway of Ernakulam and Jews street of Mattancherry are famous for spice shops.

The "backwaters" region, an extensive network of inter-locking rivers, lakes & canals that centre on Alleppey, Kumarakom, and Punnamada..