Kochi, also known as Cochin, is a major port city on the south-west coast of India. It is part of the district of Ernakulam in the state of Kerala and is often referred to as Ernakulam

The air gateway to Kochi is the Cochin International Airport (CIAL) located at Nedumbassery, which is about 34.2km (40 minutes by car) north of Kochi city, and handles both domestic and international flights. The Cochin airport provides direct connectivity to popular international destinations in the Middle East, Malaysia, Thailand, Singapore, Sri Lanka and Maldives and to most major Indian cities. It is also the fourth busiest airport in India in terms of international passenger traffic.

The major bus terminals in the city are Ernakulam Town, Ernakulam Jetty and the private bus terminal at Kaloor. An integrated transit terminal namely The Mobility Hub at Vytilla acts as a hub for long distance bus services away from the city center, and also a converging point for different modes of public transport, namely bus, metro and ferry.

The Kochi Metro is a metro rapid transit system serving the city of Kochi. The metro system has 22 stations connecting the suburban towns of Aluva and Pettah while passing through downtown. 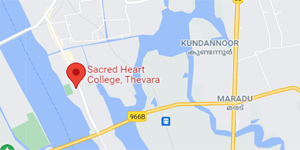